Prior to 1845, hand-made envelopes were all that were available for use, both commercial and domestic. In 1845, Edwin Hill and Warren De La Rue were granted a British patent for the first envelope-making machine.

The “envelopes” produced by the Hill/De La Rue machine were not as we know them today. They were flat diamond, lozenge (or rhombus) -shaped sheets or “blanks” which had been pre-cut to shape before being fed to the machine for creasing and made ready for folding to form a rectangular enclosure. The edges of the overlapping flaps treated with a paste or adhesive and the method of securing the envelope or wrapper was a user choice. The symmetrical flap arrangement meant that it could be held together with a single wax seal at the apex of the topmost flap. (That the flaps of an envelope can be held together by applying a seal at a single point is a classic design feature of an envelope).

Nearly 50 years passed before a commercially successful machine for producing pre-gummed envelopes effectively as we know them today appeared. 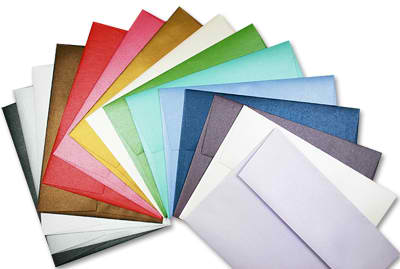 The origin of the use of the diamond shape for envelopes is debated. However as an alternative to simply wrapping a sheet of paper around a folded letter or an invitation and sealing the edges, it is a tidy and ostensibly paper-efficient way of producing a rectangular-faced envelope. Where the claim to be paper-efficient fails is a consequence of paper manufacturers normally making paper available in rectangular sheets, because the largest size of envelope that can be realized by cutting out a diamond or any other shape which yields an envelope with symmetrical flaps is smaller than the largest that can be made from that sheet simply by folding.

The folded diamond-shaped sheet (or “blank”) was in use at the beginning of the 19th century as a novelty wrapper for invitations and letters among the segment of the population that had the time to sit and cut them out and were affluent enough not to bother about the waste offcuts. Their use first became widespread in the UK when the British government took monopoly control of postal services and tasked Rowland Hill with its introduction. The new service was launched in May 1840 with a postage-paid machine-printed illustrated (or pictorial) version of the wrapper and the much-celebrated first adhesive postage stamp: the Penny Black- for the production of which the Jacob Perkins printing process was used to deter counterfeiting and forgery. The wrappers were printed and sold as a sheet of 12, with cutting the purchaser’s task. Known as Mulready stationery, because the illustration was created by the respected artist William Mulready, the envelopes were withdrawn when the illustration was ridiculed and lampooned. Nevertheless the public apparently saw the convenience of the wrappers being available ready-shaped, and it must have been obvious that with the stamp available totally plain versions of the wrapper could be produced and postage prepaid by purchasing a stamp and affixing it to the wrapper once folded and secured. In this way although the postage-prepaid printed pictorial version died ignominiously,the diamond-shaped wrapper acquired de facto official status and became readily available to the public notwithstanding the time taken to cut them out and the waste generated. With the issuing of the stamps and the operation and control of the service (which is a communications medium) in government hands the British model spread around the world and the diamond-shaped wrapper went with it.

Hill also installed his brother Edwin as The Controller of Stamps, and it was he with his partner Warren De La Rue who patented the machine for mass-producing the diamond-shaped sheets for conversion to envelopes in 1845. Today, envelope-making machine manufacture is a long- and well-established international industry, and blanks are produced with a short-arm-cross shape and a kite shape as well as diamond shape. (The short-arm-cross style is mostly encountered in “pocket” envelopes i.e. envelopes with the closing flap on a short side. The more common style, with the closing flap on a long side, are sometimes referred to was “standard” or “wallet” style for purposes of differentiation.)

The most famous paper-making machine was the Fourdrinier machine. The process involves taking processed pulp stock and converting it to a continuous web which is gathered as a reel. Subsequently the reel is guillotined edge to edge to create a large number of properly rectangular sheets because ever since the invention of Gutenberg’s press paper has been closely associated with printing.

To this day all other mechanical printing and duplicating equipments devised in the meantime, including the typewriter (which was used up to the 1970s for addressing envelopes), have been primarily designed to process rectangular sheets. Hence the large sheets are in turn are guillotined down to the sizes of rectangular sheet commonly used in the commercial printing industry, and nowadays to the sizes commonly used as feed-stock in office-grade computer printers, copiers and duplicators (mainly ISO, A4 and US Letter).

Using any mechanical printing equipment to print on envelopes, which although rectangular, are in fact folded sheets with differing thicknesses across their surfaces, calls for skill and attention on the part of the operator. In commercial printing the task of printing on machine-made envelopes is referred to as “overprinting” and is usually confined to the front of the envelope. If printing is required on all four flaps as well as the front, the process is referred to as “printing on the flat”. Eye-catching illustrated envelopes or pictorial envelopes, the origins of which as an artistic genre can be attributed to the Mulready stationery – and which was printed in this way – are used extensively for direct mail. In this respect, direct mail envelopes have a shared history with propaganda envelopes (or “covers”) as they are called by philatelists.

At the end of the 20th century a top of the range envelope-making machine cost in the region of $1 million and could produce 1200 pre-gummed envelopes per minute in boxes of 1000 ready for distribution. With manufacturing costs as high as this very few envelope-making machinery manufacturers appeared in the 19th and 20th centuries, and at the beginning of the 21st century the number satisfying the world demand remained low, with a single enterprise, Winkler+Dünnebier, producing two-thirds of the machines producing the 450 billion envelopes referred to above (which includes “pockets”). 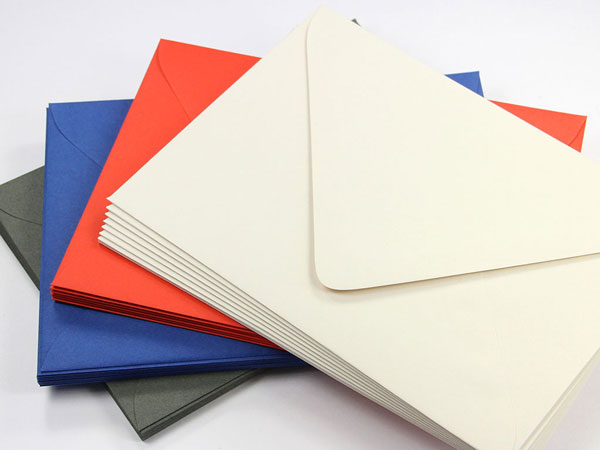 Consequently too the high cost of buying these high capital investment machines has to be factored into the operating costs of any enterprise which engages in producing printed envelopes, and so their line of business is the production of very large runs of the order of 50,000 and upwards. Depending on the size of the run this can entail the use of an entire web or reel. The result of this is that over the last 150 years or so the most common way of producing printed envelopes commercially has been to overprint on machine-made envelopes. Needless to say, only the largest of companies have a need for 50,000 or more envelopes at any one time. The drawback is that although printing on the face of an envelope is reasonably straight- forward, an envelope is not a flat sheet of paper and so if printing is required on one or more flaps this incurs higher cost as specialist printing skill is required. For small businesses with a need for relatively low volumes of printed envelopes, even if a case is made for a batch customized with no more than the company logo on the face, there is seldom justification for the added expense of printing on the flap side too. However the volume-related barrier to the use of customized envelopes by small businesses was subsequently lowered in the late-20th century with the advent of the digital printing revolution which saw the introduction of PC printers. Although designed primarily to process flat rectangular sheets these could be adjusted to also overprint on the face of rectangular machine-made envelopes in spite of the extra thickness – given suitable office applications software such as Microsoft’s Word.

PRESENT AND FUTURE STATE OF ENVELOPES

Then right at the end of the 20th century, in 1998, the digital printing revolution delivered another benefit for small businesses when the U.S. Postal Service became the first postal authority to approve the introduction of a system of applying to an envelope in the printer bin of a PC sheet printer a digital frank (uncanceled and precanceled) or stamp delivered via the Internet. With this innovative alternative to an adhesive-backed postage stamp as the basis for an Electronic Stamp Distribution (ESD) service, a business envelope could be produced in-house, addressed and customized with advertising information on the face, and ready to be mailed. 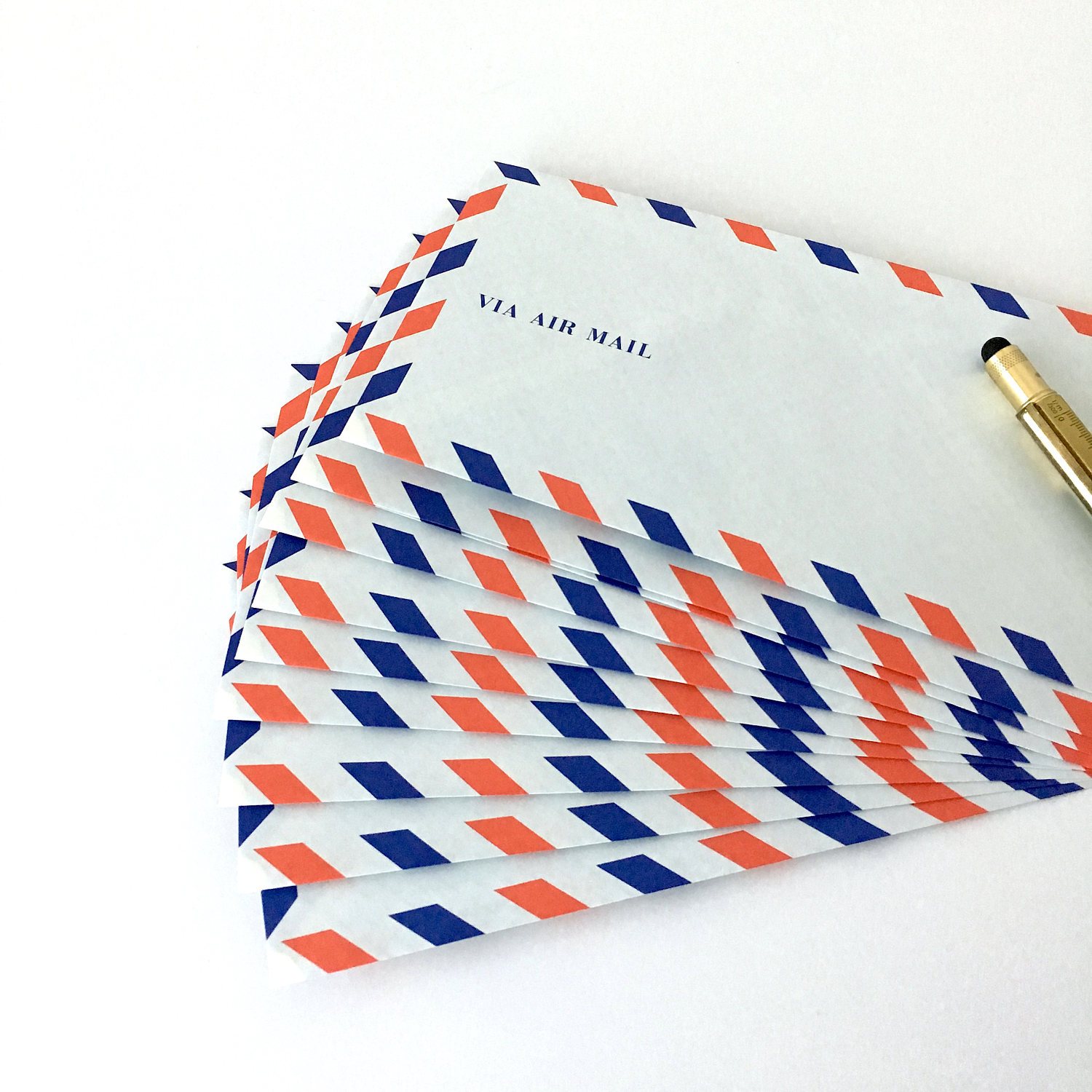 The fortunes of the commercial envelope manufacturing industry and the postal service go hand in hand, and both link to the printing industry and the mechanized envelope processing industry producing equipments such as franking and addressing machines. They are all four symbiotic: technological developments affecting one obviously ricochet through the others : addressing machines print addresses, postage stamps are a print product, franking machines imprint a frank on an envelope. If fewer envelopes are required; fewer stamps are required; fewer franking machines are required and fewer addressing machines are required. For example, the advent and adoption of information-based indicia (IBI) (commonly referred to as digitally-encoded electronic stamps or digital indicia) by the US Postal Service in 1998 caused widespread consternation in the franking machine industry,as their equipments were effectively rendered obsolescent and resulted in a flurry of lawsuits involving Pitney Bowes among others. The advent of email in the late 1990s appeared to offer a substantial threat to the postal service. By 2008 letter-post service operators were reporting significantly smaller volumes of letter-post, specifically stamped envelopes, which they attributed mainly to replacement by email. Although a corresponding reduction in the volume of envelopes required would have been expected, no such decrease was reported as widely as the reduction in letter-post volumes.

Although as regards email developments there is a substantial threat of “technology replacing tradition”, this is offset by the equal reasoning that the Universal Postal Union is an international specialized agency of the United Nations, and a source of revenue for government. Consequently any deterioration of domestic and international postal services attended by loss of revenue is a matter of governmental concern.

Comments are closed, but trackbacks and pingbacks are open. 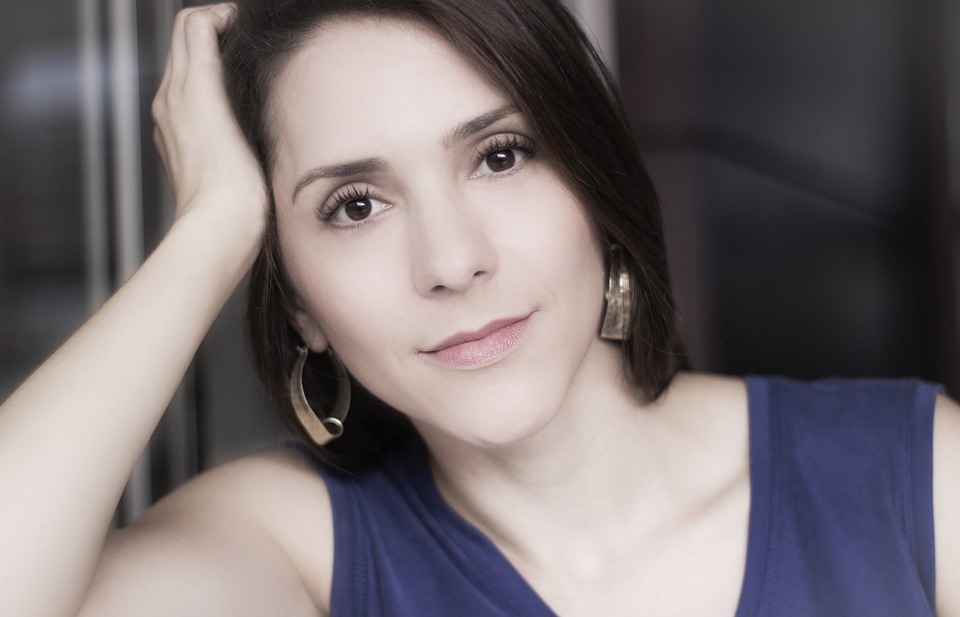 Hi there! I’m Tess and I am truly motivated by everything that surrounds me. I love blogging about envelope making (and the history behind it) and I enjoy sharing my handmade envelopes with the fantastic paper crafting community. I’m so thrilled with envelope making. So much so it’s almost a fetish, LOL! If I can share my passion for envelopes and pass along that passion, then I’ve been successful. I love that I belong to this huge, creative, paper crafting community!